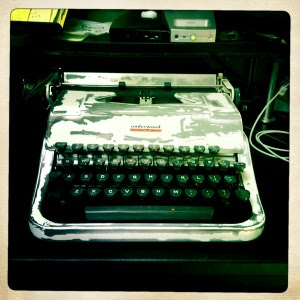 My first typewriter repair (kinda). I had reconnected a drawstring once previous on a Hermes Rocket but that didn't count. And this, well, this was only semi fixed. It's an Underwood Golden Touch.

This is what I saw once I pried the case open. 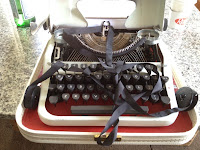 Half the keys did not strike the platen due to this crooked typebar basket in photo 1. I played detective with a flashlight, turned the typer upside down, and discovered the left side support had been dislodged from it's hole in photos 2 & 3. The 4th photo shows the right side and how it should be. I was able to relodge it back and realigned the basket as seen in 5th photo. 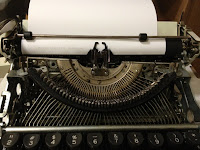 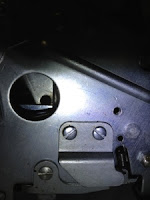 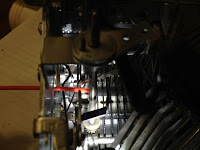 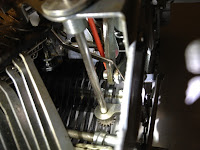 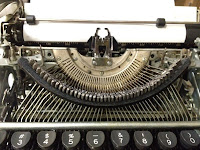 The keys now all typed, but the carriage was still scraping and bumping into "things" as it moved. I thought maybe it could be caused by loosened screws within the rail system, or it got unleveled or crooked like the basket was, so I decided to dig deeper and take it apart. The paint job got chipped quite a bit also that I thought it would be easier repainting the whole body rather than retouching. The back upper panel where the paper insert had a crummy red hand-painted-like "Home-Mark" label on it. I didn't really like it so a fresh repaint was called for. 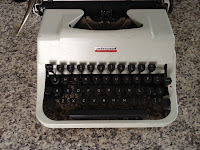 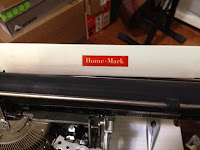 I thought I'd try giving the machine a soap bath. Here you see it drying next to my new Lexikon 80. 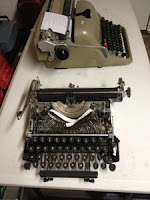 I went to Home Depot and asked an employee how to strip paint off metal. "What's it for?" The older gentleman asked. I'm trying to restore a typewriter I told him. "A typewriter?" He asked twice as if the first time wasn't enough. He shook his head and lead me to a paint remover, a scrapper, sandpaper, brushes, gloves, paint, etc. I bought all the necessary supplies which ended up costing more than the typer.

I started stripping the paint and was planning to leave it bare aluminum to see if that would look good before repainting it pearly white like a mini cooper. But I decided to stop mid-way. I kinda liked the beaten up aged look. I figured why not leave it like this for a bit and see how I feel about it. It somewhat fit the machine since I couldn't figure out how to take apart the carriage and as I examined it more, it looked like the rail or carriage had been bent or the ball bearing could be broken cause it felt like the carriage was hitting speed bumps as it moved left to right. The first bump I could figure out was the carriage cover hitting the rail, but the subsequent ones I have no clue. I'm open to any suggestions. I decided to put the machine back together before I forgot how to since I had other new purchases that I wanted to play with. 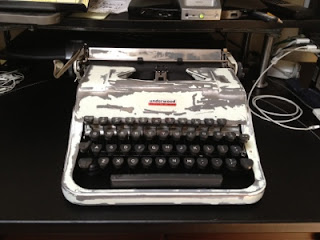 I'm still undecided on the final appearance, but the beaten look is growing on me. Right now it only types on the right side of the platen as to avoid the carriage/rail problem on the left. So it works well for my quarter sheet typecasts. I figure if I don't like this, I can finish stripping and sanding it down and eventually repaint it. I got this white Underwood originally to install the usb-ipad connection kit. If I did, it would look like this now. 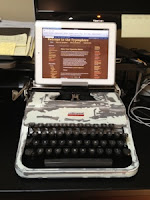